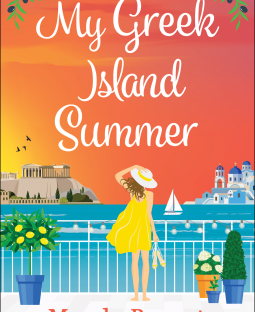 Wow another great and funny read from Mandy Baggot. I just couldn’t put it down. It’s so hot off the press that Mandy Baggot has managed to mention recent British TV shows as well as a reference to world news. Which I have to say was a pleasant surprise, as so many book we read aren’t as up to date.

I’ve now read a couple of Mandy Baggot’s books and I now need to read the rest of them. This is a laugh out loud, funny romcom, as well as being a sunny feel good book.

Becky Rose works at her sister Megan’s catering company “It’s A Wrap”. She did originally work in a bank, but left to help her sister set up her business. As she thought her sister needed her support as they had lost their father to a second stroke, then their mother left and moved up to Blackpool to be near her sister.

Late one morning while Becky and the other two employees Hazel & Shelley were nearing the end of that mornings orders. Megan comes in even more full of herself than usual. It turns out that she had just won another catering contract. This contract is so good they may need to eventually take on more staff. Just before Megan could leave again Becky asked her about the bid for the local nursing home’s summer party. Megan doesn’t want anything to do with it saying its too small a contract to be bothered with.

This really upsets Becky as this was they same nursing home that looked after their father until he passed away. Then to add insult to injury Megan announces that she and Dean will be going away for two weeks later in the summer and did anyone know of a business manager that could cover her job. Shelley tried to put in a good word for Becky, but Megan indicated that Becky wasn’t good enough to do her job.

Becky is so upset and annoyed that she storms out of the building before she says anything she will regret. After a few minutes Shelley comes out to see her and suggests that it may be time to go away on holiday. Shelley is then pulling out a handful of holiday brochures out of her huge handbag. Telling her to look at them as well as pointing out the cruse she has booked for herself in September.

That night Becky decides that she is going to put a pitch in for the nursing home’s summer party, even if Megan doesn’t like it. Also that night Becky searches the web for holidays and stumbles across a house sitting holiday website. She signs up and sends an email to the owner, saying she is available and interested in the job of house sitting her luxury villa. The owner gets back to her virtually straight away telling her that she must be single as she doesn’t want any couples staying in her luxury villa. Becky says it’s just her and the owner agrees that Becky can house sit for her, but she has to pay for her own flights.

The following week and finally though security, Becky tries to look like an experienced traveller until she falls over. Spilling the contents of her huge borrowed travel bag. She feels totally humiliated but she thinks what are the chances of her being on the same flight as the men she has just fallen in front of, or her even bumping in to them again.

Sitting down in her aisle seat, she wondered if she’d have anyone sitting next to her. When Elias Mardas comes up to her aisle asking to get past her to get to his window seat. When Becky realises it’s the same man that helped her collect some of her things, when she fell. Feeling like a fool again Becky tries to act cool.

During the flight they talk for a little while, Becky has told him a few fibs regarding herself taking note of what her friends had warned her about. As they neared Athens Becky was getting concerned as her flight from Athens to Corfu was getting nearer and nearer departure time.

By the time their flight lands it becomes clear that there is a chance that she won’t make the connection. She isn’t the only one as there are about ten people that have missed the same flight as non of them could get a direct flight to Corfu. With all the commotion going on Becky keeps close to Elias and they both make acquaintances with a young woman called Petra. It turns out that they have to stay in Athens for the night and the three of them go out to where all of the locals hang out as Elias becomes their unofficial tour guide.

They all arrive in Corfu two days later than expected, but the three of them have had some fun together with Elias being their unofficial guide, but now with Elias going on his way and the girls going theirs. It’s time to say good buy. However Petra manages to twist Becky’s arm in to letting her say with her for a few nights. So they all head off not expecting to see Elias again.

When Becky and Petra get to the Luxury villa all hell has broken loose, there is a Greek woman in the house who tells them off for being late and tells them that they have a mess to clean up as some animals have managed to get in to the villa. All the while Becky can’t stop thinking about Elias.

Can things get any worse on this holiday? Did Becky imagine that there was an attraction between her and Elias and will Becky find out more about why Petra is sometimes so reckless, is she trying to run away from something. Becky isn’t sure but she feels responsible for the girl even though they have only know each other for a few days.

There are a few parts that I highlighted in this book because they had me laughing out loud and my favourite quote out of them all is this:

I know why there are pink feathers down there! There’s a f***ing flamingo in the bath!”

I loved this book and as I’ve already said I will make sure I read all of the other books that Mandy Baggot has written and I will also make sure that I read all of her new books in the future.

1 thought on “My Greek Island Summer”