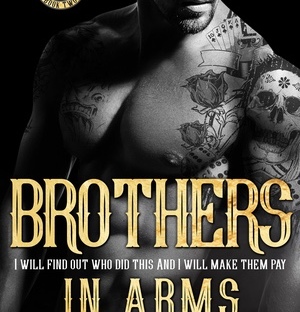 Brothers in Arms takes off exactly where book one Kings of Mayhem ends. The story is still based around Indy (Indigo Blue Parish) and Cade Calley. This book is also shorter by 100 pages but it doesn’t impact on the story or the pace of the book.

Book one ends with the murder of one of the Kings. As Indy goes in to her Emergency Doctor mode trying to save the fellow Kings life, the shooter strikes again by shooting him in the head killing him instantly.

Indy goes in to shock and Cade can’t think about anything else other than revenge. This death is the first but it most certainly wont be the last. This first death changes Cade. He becomes more and more distant with his grief, and with each subsequent death he becomes more and more consumed with revenge. Which is putting a bigger and bigger distance between him and Indy, as he wont let he in.

Who is trying to hurt the Kings of Mayhem M.C. Is it one of the rival M.C.’s as they have a few or is it, someone much closer to the home of the M.C. Whoever it is they are trying to destroy and bring down the Kings. How may people will die before they find out who is behind it all. Will this be the end of the King? Will Cade and Indy’s love for each other survive?

I really enjoyed this book and yet again I have gone straight to book three in the series. Which I received via NetGalley as an ARC (Advanced Reader Copy) and will be available to all in a few days. Like I said with book one this book is also like SOA.

Even though there are murders and a woman is attacked it has all been tastefully and well written. If you also enjoyed book one then this is a must read. I’m really enjoying this series so far and I can’t wait till there are more books as I have fallen in love with The Kings Of Mayhem M.C.

1 thought on “Brothers in Arms”