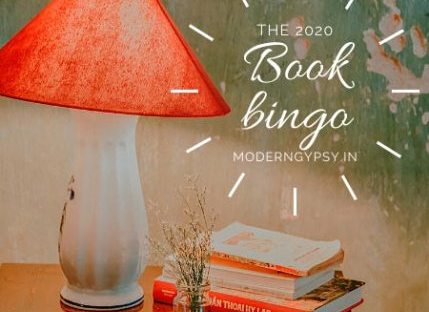 Well I should have posted this on 30 June 2020 but I forgot to actually post it. I guess late is better than never. It’s the second check in for the Modern Gypsy Book Bingo 2020’s Reading Challenge. I originally went for the top row on the bingo card below. You can see that I have highlighted in Turquoise what I managed to mark off the bingo card for the. If you want to see my first update and what books I read please follow the Link: Update 1

I think I’m trying to go for a full house by the end of the year, but I will have to see how I get on. Anyway with this update you can see that I have now completed the top line and I’ve nearly finished row two and that I have added one extra book to rows 4 and 5. You will find listed below the books that I read for the new categories coloured in pink.

We Germans by Alexander Starritt

Synopsis: When a young British man asks his German grandfather what it was like to fight on the wrong side of the war, the question is initially met with irritation and silence. But after the old man’s death, a long letter to his grandson is found among his things.

That letter is this book. In it, he relates the experiences of an unlikely few days on the Eastern Front – at a moment when he knows not only that Germany is going to lose the war, but that it deserves to. He writes about his everyday experience amid horror, confusion and great bravery, and he asks himself what responsibility he bears for the circumstances he found himself in. As he tries to find an answer he can live with, we hear from his grandson what kind of man he became in the seventy years after the war.

We Germans is a fundamentally human novel that grapples with the most profound of questions about guilt, shame and responsibility – questions that remain as live today as they have always been.

A Book About Books:

Synopsis: This summer will change everything!

Aria Summers knows what she wants.

A life on the road with best friend Rosie and her beloved camper-van-cum-book-shop, and definitely, definitely, no romance.

But when Aria finds herself falling – after one too many glasses of wine, from a karaoke stage – into the arms of Jonathan, a part of her comes back to life for the first time in years.

Since her beloved husband died Aria has sworn off love, unless it’s the kind you can find in the pages of a book. One love of her life is quite enough.

And so Aria tries to forget Jonathan and sets off for a summer to remember in France. But could this trip change Aria’s life forever…?

A heart warming, uplifting and hilarious novel of friendship, love and adventure! Perfect for fans of Debbie Johnson and Holly Martin.

In Support of Indie Publisher:

A Touch of Death (Outlands Pentalogy) by Rebecca Crunden

Synopsis: A thousand years in the future, the last of humanity live inside the walls of the totalitarian Kingdom of Cutta. The rich live in Anais, the capital city of Cutta, sheltered from the famine and disease which ravage the rest of the Kingdom. Yet riches and power only go so far, and even Anaitians can be executed. It is only by the will of the King that Nate Anteros, son of the King’s favourite, is spared from the gallows after openly dissenting. But when he’s released from prison, Nate disappears.

A stark contrast, Catherine Taenia has spent her entire life comfortable and content. The daughter of the King’s Hangman and in love with Thom, Nate’s younger brother, her life has always been easy, ordered and comfortable. That is, where it doesn’t concern Nate. His actions sullied not only his future, but theirs. And unlike Thom, Catherine has never forgiven him.

Two years pass without a word, and then one night Nate returns. But things with Nate are never simple, and when one wrong move turns their lives upside down, the only thing left to do is run where the King’s guards cannot find them – the Outlands. Those wild, untamed lands which stretch around the great walls of the Kingdom, filled with mutants and rabids.

In The Back Drop of War:

Synopsis: Based on the true World War II story of the heroic librarians at the American Library in Paris, this is an unforgettable story of romance, friendship, family, and the power of literature to bring us together, perfect for fans of The Lilac Girls and The Paris Wife.

Paris, 1939: Young and ambitious Odile Souchet has it all: her handsome police officer beau and a dream job at the American Library in Paris. When the Nazis march into Paris, Odile stands to lose everything she holds dear, including her beloved library. Together with her fellow librarians, Odile joins the Resistance with the best weapons she has: books. But when the war finally ends, instead of freedom, Odile tastes the bitter sting of unspeakable betrayal.

Montana, 1983: Lily is a lonely teenager looking for adventure in small-town Montana. Her interest is piqued by her solitary, elderly neighbour. As Lily uncovers more about her neighbour’s mysterious past, she finds that they share a love of language, the same longings, and the same intense jealousy, never suspecting that a dark secret from the past connects them.

A powerful novel that explores the consequences of our choices and the relationships that make us who we are—family, friends, and favourite authors—The Paris Library shows that extraordinary heroism can sometimes be found in the quietest of places.

A Book About Our Fury Friends:

Cat and The City by Nick Bradley

Synopsis: In Tokyo – one of the world’s largest megacities – a stray cat is wending her way through the back alleys. And, with each detour, she brushes up against the seemingly disparate lives of the city-dwellers, connecting them in unexpected ways.

But the city is changing. As it does, it pushes her to the margins where she chances upon a series of apparent strangers – from a homeless man squatting in an abandoned hotel, to a shut-in hermit afraid to leave his house, to a convenience store worker searching for love. The cat orbits Tokyo’s denizens, drawing them ever closer.

In a series of spellbinding, interlocking narratives – with styles ranging from manga to footnotes – Nick Bradley has hewn a novel of interplay and estrangement; of survival and self-destruction; of the desire to belong and the need to escape. Formally inventive and slyly political, The Cat and The City is a lithe thrill-ride through the less-glimpsed streets of Tokyo.

A Book Written by A WOC:

This Lovely City by Louise Hare

Synopsis: An atmospheric and utterly compelling debut novel about a Jamaican immigrant living in postwar London, This Lovely City shows that new arrivals have always been the prime suspects ― but that even in the face of anger and fear, there is always hope.

London, 1950. With the war over and London still rebuilding, jazz musician Lawrie Matthews has answered England’s call for labour. Arriving from Jamaica aboard the Empire Windrush, he’s rented a tiny room in south London and fallen in love with the girl next door.

Playing in Soho’s jazz clubs by night and pacing the streets as a postman by day, Lawrie has poured his heart into his new home ― and it’s alive with possibility. Until one morning, while crossing a misty common, he makes a terrible discovery.

As the local community rallies, fingers of blame point at those who were recently welcomed with open arms. And before long, London’s newest arrivals become the prime suspects in a tragedy that threatens to tear the city apart. Immersive, poignant, and utterly compelling, Louise Hare’s debut examines the complexities of love and belonging, and teaches us that even in the face of anger and fear, there is always hope.