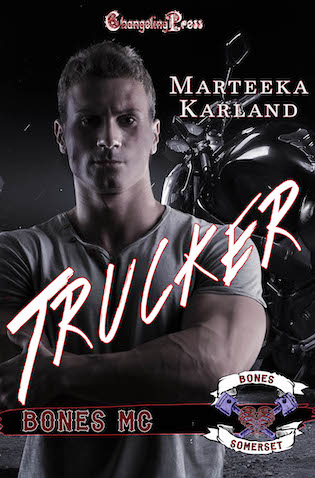 Helen — I’ve made some bad choices in my life. The worst was falling for a man who kidnapped me and held me hostage. He wants my baby. Why, I have no idea, but there’s no way he’s getting it without a fight. Once this is over, assuming I’m still alive, I’m going to need some serious help.

Trucker — The small redhead blows me away at first sight. And not only because of the knife sticking out of her very pregnant belly. She’s fierce as a tiger. Brave as any member of Bones. I know I have to protect her, no matter what kind of trouble she’s in. Once she’s healed, I know she’s going to be mine. I just have to convince her of it. Until then, I’ll protect her, and her kid, with my very life. Once the asshole who did this is dead, then I’ll prove to her why I’m the best choice to be her man.

WARNING: These men play for keeps, and they don’t tolerate men who hurt women and children. They protect their own to the death, and God help anyone who gets in their way. Don’t expect the warm and fuzzies, but you can always expect a HEA and a steamy good time.

“You said you were already several weeks pregnant when all this happened. Where’s the father?”

She looked away again, ashamed. “No idea. I met him at a bar. We got drunk and had a good time. Obviously we weren’t careful, and the next thing I know, I’m making a few changes to my life.” She looked back, needing to judge Trucker’s reaction. She didn’t expect the big grin she found. “What?”

“Nothin’,” he said, raising his hands, a gesture of surrender. “Just thinkin’ that if your baby daddy ain’t around, that makes my life a lot simpler.”

Helen couldn’t help it. Her jaw dropped and the breath left her lungs. “How can you even say that? How horrible!” She wanted to punch him right in the mouth. “I’m all alone. My child has no father, and I’ve just been through the most horrific thing I’ve ever imagined! How can me not having someone around to protect me and my daughter be a good thing?”

Trucker was completely unapologetic. “Means you’ll need someone around to fill that gap.” He shrugged. “Sounds like your baby daddy ain’t qualified in that department so I’ll have to take over.”

She blinked, not sure she’d heard him correctly. “I beg your pardon?”

“I said, I’m taking over as your baby daddy.” The man was grinning like an ape, obviously finding the whole situation hilarious.

“Would you stop saying ‘baby daddy’? I hate that!”

“Sorry. Let me rephrase. I’ll be taking over as protector for you and your daughter. You’ll stay here with me and the rest of the club, and you’ll have all the help and safety you need.”

“Do you want a say in this?” Again, his gaze was intense. He seemed to look straight into her soul when he wanted to. Helen wanted what he was offering more than just about anything else in the world right now. She wanted that security. But was it real? Had she traded one prison for another? “Or do you want me to make the decision for you?”

“That’s what I thought. You’re afraid, and that’s natural. I think you want someone to force your hand.” He picked up her hand again, and this time she didn’t pull away. “You have to be here for a while anyway to heal. Get to know us. I promise you’ll feel better about the whole thing.” While he talked to her, he slowly brought her hand to his lips.

When he finished, he kissed her fingers gently, his mouth lingering far longer than she should have let him. Helen’s stomach rolled. It was the first intimate contact she’d had since her one-night stand. She tried to put down her reaction to lack of human contact, but she doubted that was the only reason for it.

She burned at his simple touch. Shivers raced over her body, and she broke out in a light sweat. Then he turned her hand over and brought her palm to his lips. Inhaling, he closed his eyes and kissed the center. When he exhaled, he opened his eyes and stared straight into hers. There was longing there. Not just a sexual hunger, though that was present too, but something inside him that connected with something inside her. He’d been with her nearly the entire time she’d been at the Bones clubhouse. He’d been unfailingly gentle. He was good with her daughter, whom she’d yet to name. Now, he indicated he wanted to share more with her. Was she ready?

No. Not yet. But she could feel her resistance to him wasn’t what it should be. Trucker could break down those walls with little effort. The question was, how long would he try before he gave up? How long did she want to resist him?

Romance author by night, emergency room tech/clerk by day, Marteeka Karland works really hard to drive everyone in her life completely and totally nuts. She has been creating stories from her warped imagination since she was in the third grade. Her love of writing blossomed throughout her teenage years until it developed into the totally unorthodox and irreverent style her English teachers tried so hard to rid her of. Now, she breathes life into faeries, space hunters, werewolves, vampires, shapeshifters, and a few just plane ole ordinary people. She loves to see the awkward, self-conscious band geek get the captain of the football team and make him beg for it.