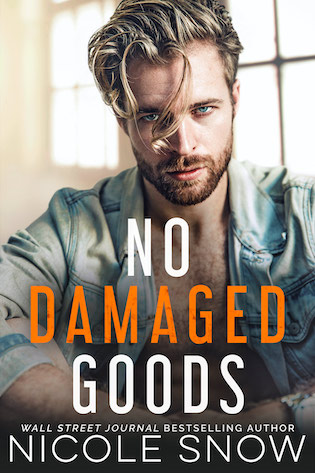 Wintering in Heart’s Edge isn’t a choice when my van goes kaboom!
Neither is gawking at the human bulldozer who keeps charging to my rescue.
If only we could stop butting heads.
But I’m a healer. What’s wrong with offering a grumpasaurus a massage?

I’m hardly obsessed.
I’m not tuning into his radio love line every single night.
That charred lump of coal he calls a heart isn’t that fascinating.
I can handle one itsy bitsy insta-wildfire kiss.
Those fires some arsonist punk keeps setting around town, though…

Fine. I know I don’t belong in Blake’s desperado world.
Only, he won’t let me go until I’m safe.
Some men wear Bad Idea on their sleeve.
But sometimes the heart falls hard for damaged goods.
Hold me.

From Wall Street Journal bestselling author Nicole Snow – cupid slaps some sense into one small-town protector who swore he’d never love again. Witness an ultra broody hero man coming back to life for the spitfire he can’t live without. Full-length standalone romance novel with a bold shot of Happily Ever After.

Lines of age and maybe frowns, maybe laughter, trace wild history around his mouth, his eyes. He’s got cheekbones for days, a mouth like a cruel kiss, and his pulse ticks in stark highlight against his strong, firm throat as the light glides over him.

He’s grimmer than I expected.

An absolute stone of a man.

That softness I’d heard in his voice isn’t there in his face. Almost like his body’s a granite vault for holding the gentleness hidden away inside.

Why, Blake? I can’t help wondering.

But I think I get a little hint of an answer as he turns, striding toward me.

He moves like a man who knows how powerful he is.

Slow and controlled, smooth ripples of chiseled musculature trailing down from broad shoulders, over the sweat-darkened pull of pecs against his clinging black shirt. The tight line of his abs and narrow hips switch in a rhythm that’s as sensuous as a hunting panther’s slink.

But he also moves like a man who knows what hell is.

Somehow, I don’t think it’s just firefighting that taught him.

He’s favoring his left leg. Some kind of injury, the kind of walk that says he’s learned how to hide it, but he can’t always keep it down.

His strength fights against his own weight. He’s built to support that wall of a body, but every ounce of well-crafted muscle is also another ounce of pressure crushing down on the invisible wound, making him list just slightly to the left with every stride.

I probably wouldn’t notice if I wasn’t used to searching for pain.

That’s what massage therapists do.

Learn people’s pain, so I can tame it and chase it away.

But he’s stoic, withdrawn, as he stops in front of me, scanning my body with a critical eye that makes me feel kind of like one of those dummies they teach you first aid on.

Eep. So much for all those flutters. My butterflies just iced over.

I smile faintly, pulling my frozen fingers from my pocket to wiggle them at him in a little wave. “Only person out here with a burning wreck. Blake, right?”

He only grunts, giving me another one of those looks. “You’re not hurt?”

“No.” I shake my head. “I jumped out and got away as soon as I had the van parked on the side of the road. I’m just cold.”

“Lucky it’s not quite cold enough tonight for hypothermia, but you’ll still catch a chill.”

He takes a step back then, retreating to the fire truck, and digs out one of those massive, thick fire jackets from a side compartment. It’s deep grey with reflective yellow and orange bands on the sleeves and back.

Slowly, he returns to me and swings it around my shoulders.

For a moment, I’m almost wrapped up in his arms. He reaches around me to pull the jacket tight, draping it over my shoulders and then drawing it in to bundle me up.

Now, my butterflies are thawed.

And it’s definitely not the jacket leaving my face so hot my ears burn against the cold, the contrast bordering on painful.

Why did he have to be so…so…

All of that, including the faint whiff of cologne and Goliath I get as he straightens, still looking at me with this fierce, unmovable gaze. 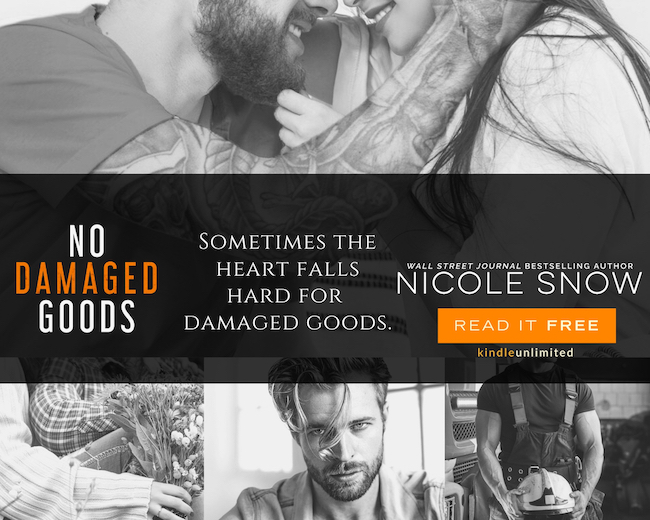 Nicole Snow is a Wall Street Journal and USA Today bestselling author. She found her love of writing by hashing out love scenes on lunch breaks and plotting her great escape from boardrooms. Her work roared onto the indie romance scene in 2014 with her Grizzlies MC series.

Since then Snow aims for the very best in growly, heart-of-gold alpha heroes, unbelievable suspense, and swoon storms aplenty. With over a million books sold, she lives for the joy of making two people fight with every bit of their soul for a Happily Ever After.