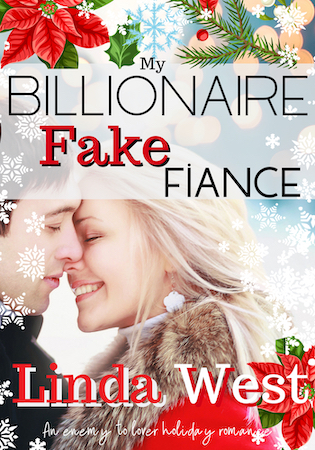 He needs a fiance to seal a deal. She needs a Christmas miracle to save her home.

Devlin is a sexy billionaire with a successful company that supplies boxes to Bamazon. Allie is an activist trying to save the trees. When these two opposites are forced to strike up a deal the fickle snow flurries of fate send them down a destined road they never expected. Set in the adorable snow town of Kissing Bridge with a quirky loveable cast of characters sure to make you smile.

He looked up with a sneer that somehow made him even more handsome than his usual dumb-looking, charming Peter Pan look.

“Anyway, would you like me to take you home now?” I tried to keep the hope out of my voice.

He pulled the ring out of his pocket and looked at it wistfully. “No. I have to fix this somehow. I just have to think.” He hit himself on the side of the head a little too hard.

Devlin stopped like a child that had been reprimanded and stared at the ring again in a trance. Rich people problems. Maybe I should take him to his therapist.

“What, exactly, were you trying to get your fiancée to do?” I had to ask. “Because you obviously didn’t want her to be herself.”

I rolled my eyes.

“Balderdash! I thought she was fine being single. Women!”

I looked at him with no sympathy.

He let out a big sigh. “My father’s a traditionalist. I just thought it would be better this way. Make him happy. Win-win.”

I shook my head.

“In what logical world did you think that you were going to bring home an exotic dancer and get her to act like she was a perfect 50’s wife?”

He clenched his hands.

“Well, if you just needed a darn fake date, you would have been better off grabbing somebody off the street than trying to remake Sofia Denario!” 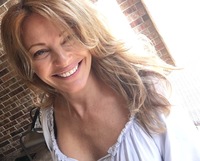 Linda West loves writing for a living. She grew up in a small town near Buffalo and wrote her first novel at the age of seven to absolutely no acclaim:) Linda is the author of the adorable and enchanting “Christmas Kisses and Cookies.” It is a delightful series of holiday romances based around the town of Kissing Bridge and the magical Landers sisters who are the reigning blue ribbon cookie queens thanks to their mothers’ ‘special’ recipe book.
Linda was the owner of Mayberry – a celebrity-filled restaurant in Malibu where many of her recipes enchanted the regulars such as Tom Hanks and Anthony Hopkins to name a few. Her recipes are sprinkled throughout her fiction books much to the delight of her fans.
Her newest venture is in the cozy mystery and humor genre. With – Death by Crockpot – the first in her newest series -Linda takes her favorite known characters from Kissing Bridge and throws them into some side-splitting funny adventures. Her novels are about true love, hope and magic please come visit her wonderful world.
Non-fiction:
Linda West is the best selling author of the most popular law of attraction book ‘The Frequency’. She wrote the first book on the science of frequencies as it relates to manifesting and broke a code in the Mayan Calendar where she researched her book alongside famous scientists such as Terrence McKenna. She is a youtube personality and counsels people on the law of attraction all over the world. Her newest book, Advanced Manifesting’ is considered the pinnacle of books on manifesting.