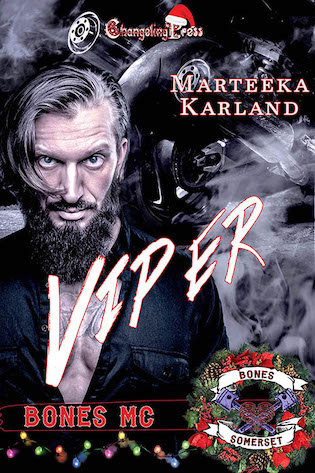 Darcy: I didn’t run away from a sadistic stepfather and a mother who wouldn’t protect me from him to be carted off by a strange man. I fought the son of a bitch. Woulda won, too, except the bastard had help. He was rough around the edges and some kind of bad-ass biker so there was no way this was going to work out well. Unfortunately, he called to me on a purely sexual level. Made my heart race and my body melt just by looking at me. It didn’t help that he was actually nice to me. He claimed to know my dad. My real dad. Said he’d been sent to bring me back. I had no idea if I believed him or not. Just didn’t really have a choice but to go along with him. At least for now.

Viper: I tracked the cunning little wench for three fuckin’ days. In the fuckin’ snow. Little wench was good, too. She survived on her own in a hostile environment with only a little trouble. That alone would have given me respect for her, but then she had to go and kick me in the balls. Had I not been on the ground in agony, I’d have been turned on beyond belief. Now, with her safely under my protection, I’ve got to figure out how to keep my hands off her so her father won’t kill my sorry ass. He’s our intel man and one of my best friends, so I don’t want to cause him grief. But I want Darcy. Badly.

As Christmas nears, an enemy approaches us with a unique gift. One that will leave all of us with hard choices. Darcy especially. What unfolded next was never somethin’ any of us planned for.

Romance author by night, emergency room tech/clerk by day, Marteeka Karland works really hard to drive everyone in her life completely and totally nuts. She has been creating stories from her warped imagination since she was in the third grade. Her love of writing blossomed throughout her teenage years until it developed into the totally unorthodox and irreverent style her English teachers tried so hard to rid her of. Now, she breathes life into faeries, space hunters, werewolves, vampires, shapeshifters, and a few just plane ole ordinary people. She loves to see the awkward, self-conscious band geek get the captain of the football team and make him beg for it.