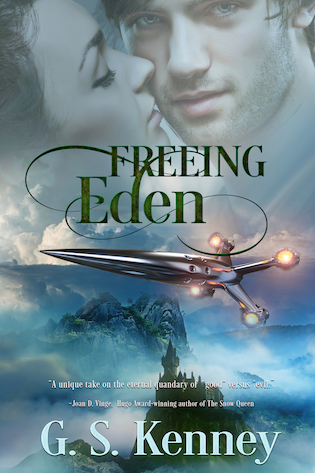 A unique take on the eternal quandary of “good” versus “evil.”
— Joan D. Vinge, Hugo Award-winning author of The Snow Queen

All trader Zara wanted was to help Kell, a clone, retrieve his maker’s memories and discover who he really is. The conflict-torn planet Eden was supposed to be just a stop en route, but Kell begins recalling fragments of memories from Swifthammer, Eden’s now-deceased resistance leader. Despite Zara’s misgivings, Kell assumes Swifthammer’s role, opposing the planet’s foreign warlord Reuel.

But Reuel’s schemes take a dangerous turn when it becomes clear he has tampered with Kell’s programming. Could the memories Kell now begins to experience be . . . Reuel’s?

Kell struggles to bring peace to Eden by uniting his maker’s heritage with that of the planet’s oppressor, but Zara fears she may be losing her heart to the man who is poised to become Eden’s next and most terrible warlord. Can she help Kell find an identity all his own–and a future they can share together?

At seventeen thirty local time, a low, melodious chime sounded in the room.

The clone had his arm over her shoulder, and she rested her cheek contentedly on his chest. She could feel his heart beating, and his light breathing stirred her hair.

“I hope you’ve gotten used to all my talking by now.” She twisted beneath his arm so that she could face him. “Wouldn’t it be wonderful if you could talk, too?” Zara stroked the clone’s cheek, and a slight smile came and went across his lips. “I almost believe you could.” She looked longingly at him. “And then I would say, Hello, my name is Zara. Za-ra.” She pronounced the word carefully. “And you would say, My name is . . . Now, what would your name be?”

Zara pulled back, her pulse pounding. “What? What did you say?” The baseclone looked at her with his habitual open gaze, head slightly tilted, as if waiting for something that didn’t really matter. He said nothing.

Zara felt a lump in her throat, coupled with an almost desperate urgency. “Please. Please say it again. What is your name?” He watched her silently and then hesitantly touched her cheek, looking for all the world as if he were trying to comfort her.

Zara took his hand away from her cheek, kissed his palm softly, and then wrapped the hand firmly in her own. She met his gaze and held it. “Tell me your name. Please. I really want to know.”

A tear rolled down the baseclone’s cheek, and then another, and Zara felt that her heart would break. “Why are you crying?” she whispered. “Have I hurt you? I didn’t mean to.” Softly, her fingers traced the track of the tear down his cheek.

Zara let out the breath she hadn’t realized she was holding, and she allowed herself to fall back against Kell’s chest. He wrapped his arms around her.

Zara sighed. “Twenty minute warning. I can’t leave you here. In this place. This life. By all of space, Kell, you are not a baseclone. There’s no control unit in your dataport, but you’ve been watching and responding to me. I could begin to believe there might be some kind of advanced baseclone I don’t know about that can do some of that, but you—you have feelings. You were crying! And you understand me and can answer, which means you have some intelligence, even language. You’re not a baseclone, and you don’t belong here.”

She stood up and walked to the mirror that was mounted on the wall opposite the couch. Straightening her hair’s disarray, Zara watched him in the mirror as he watched her in turn.

“The papers attached to my contract show you were discharged as a baseclone, but I can’t believe it.” She took out her comm. “I’ve transported baseclones, so I have access to the discharge database on Bigollo.” She spoke the access code and her password and authenticated her identity with a thumbscan. “I’ll use your ID number from the contract.” As data appeared on the small screen, she frowned, shook her head, and rekeyed the number.

She shook her head again, more stubbornly. “Something’s wrong here. The database on Bigollo says that you died in the tank, and the body was disposed of a month and a half ago.” She rubbed the goosebumps on her arms. “But clearly you’re not dead, because a couple of weeks ago you turned up here on Lesurat as a baseclone with no name and no owner. But that’s false, too. You’re a trueclone, not a baseclone. So what’s going on?”

He watched her openly, patiently.

“I can’t get into the database of creators. There was no need, since I was dealing only with baseclones on that job. There’s no clue in the data I have as to who or where your creator might be.”

“Ten minutes. Not enough time to figure this out. So let’s just focus on the urgent question, which is, what are we going to do about it?”

She began pacing up and down the small room. “If the administrators on Bigollo knew you were a trueclone, you wouldn’t have been sold here. So most likely, they don’t know. That means all I have to do is tell the manager, and he will do the right thing, whatever that is. Return you to the lab, I guess, so that your creator can be found and notified.”

She sighed again and turned back to Kell. “On the other hand, this is Lesurat we’re talking about. That man is as greedy as the rest of them. Even if he’s honest, he’ll want very much to doubt me. His purchase papers are in order, and so are the baseclone discharge papers from Bigollo. He’ll rely on them. He’ll ask himself, What would a spacer know? And he’ll answer, Nothing. She’s mistaken.”

Zara pulled at Kell’s arm. “Sit up straight, Kell. I’m talking to you. We have to figure this out, and we don’t have much time.”

“If he’s not so ethical, the situation will be the same, or worse. He’ll pretend very graciously to accept my comments and thank me profusely and just continue doing what he’s doing with you.” A shiver ran down her back. “I can’t bear to think about that.”

As if sensing her distress, Kell touched her arm gently.

“Thanks, Kell.” Zara managed a smile that she hoped would pass for reassuring. “You’re so much more than a normal baseclone. But touching is not what I need right now. What I need is an idea. I don’t suppose you would have that?” She looked at him quizzically, not entirely sure that he wouldn’t, but Kell said nothing. He watched her impassively, waiting.

Zara sighed. “No, I suppose not. If you’d had an idea, you would have been out of here days ago, right? I guess I have to figure this out by myself. So, let’s see . . . we aren’t going to get any help from the manager here. That means it’s up to me. Kell, listen. If I can get you out of here, would you want to come with me?”

Zara studied the clone, but his open expression didn’t change, gave no clue to what he might be thinking. If anything, she reminded herself. But he looked so vulnerable that her heart ached. “Now, come on. Answer me. If I’m going to put myself on the line for you, I need to know how you feel about it. Would you want to come with me?”

Those beautiful blue-in-blue eyes studied her, seemed to be giving the question some thought. But he didn’t answer.

What had she expected? 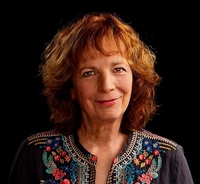 Author G. S. Kenney started reading early, and never stopped. In kindergarten, drawn in by an interesting book with a picture of three witches at a cauldron, she learned to read by starting with Macbeth. Now she writes speculative fiction. Her science-fiction romance novel Freeing Eden, published by Soul Mate Publishing, was a 2018 finalist in the Golden Heart® contest of the Romance Writers of America. The Last Lord of Eden, the second novel in the Ascent of Eden series, will be published by Soul Mate soon.